What a year has this been for Rotki! With less than two days left in 2019 this post is meant to highlight the biggest things that happened in the project during the past 12 months, list what we have achieved and look to what is coming in the future.

January started with the publishing of Rotki v0.6.0, the last release before v1.0. 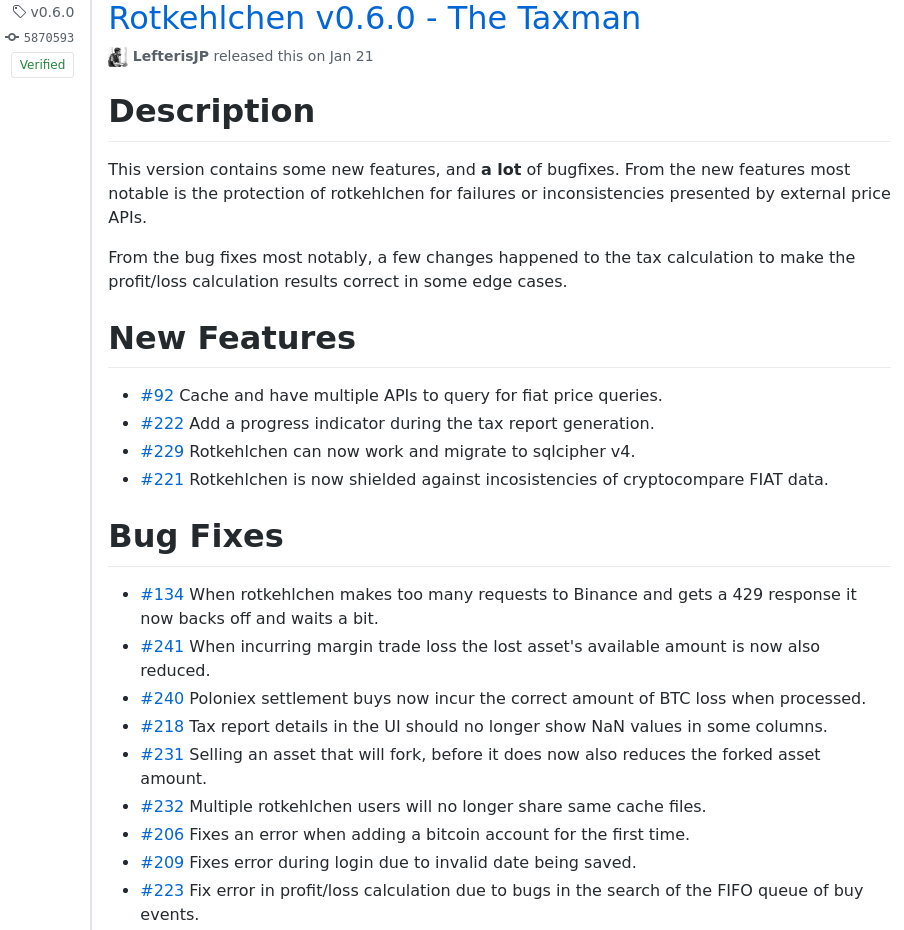 It was a big release containing many bug fixes but also introducing some features like the API query caching or the tax report progress indicator that stay with Rotki even to this date.

Other than that development continued with a good pace.

Work on Rotki continued. The project’s source code was ported to Windows and for the first time Rotki gets to run in a Windows environment. 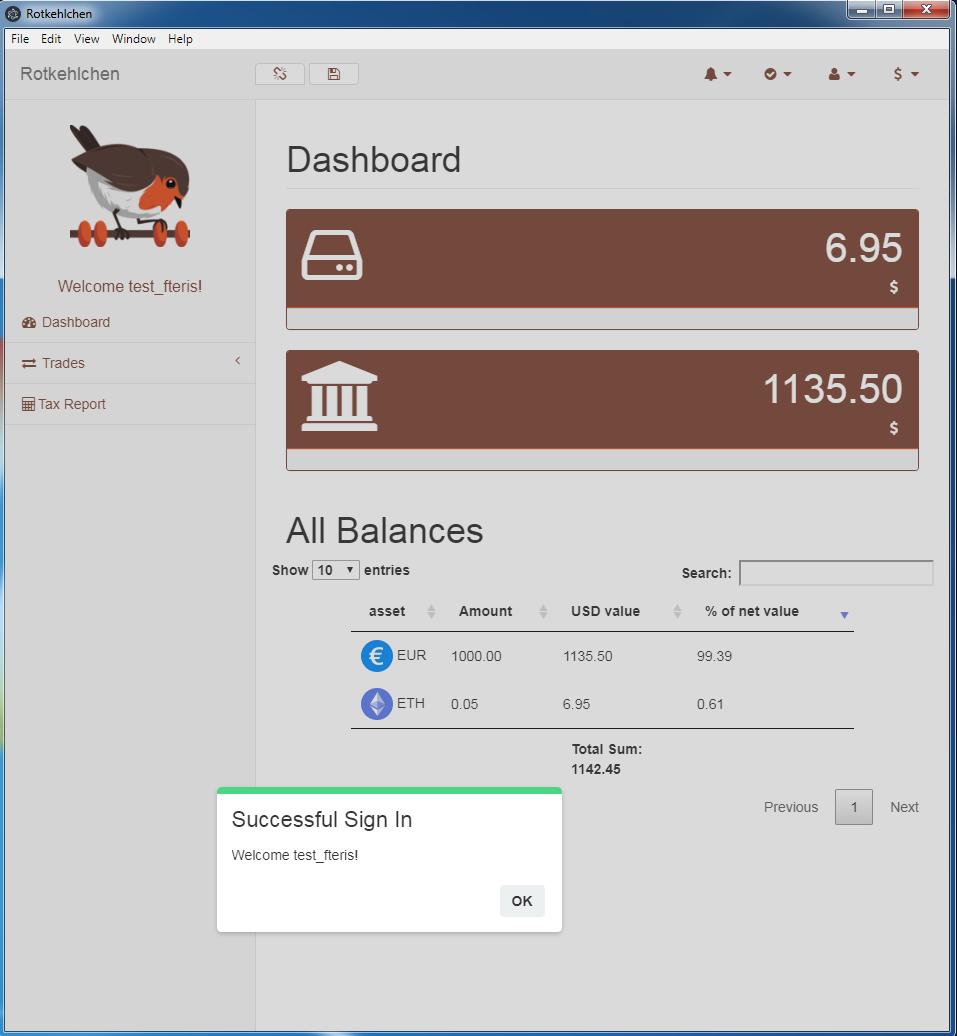 Trying to port code to Windows is not an easy thing, especially coming from a Linux background, but seeing the end result of the app running inside an all familiar looking windows themed frame is really rewarding.

Apart from that a lot of work on improving the experience of the application was done such as accomodating for Token upgrades starting with the new MLN token.

Rotki participated in ETHCC 2 in Paris and gave a talk on what Rotki is, what is the problem that we are trying to solve and what would v1.0 bring. 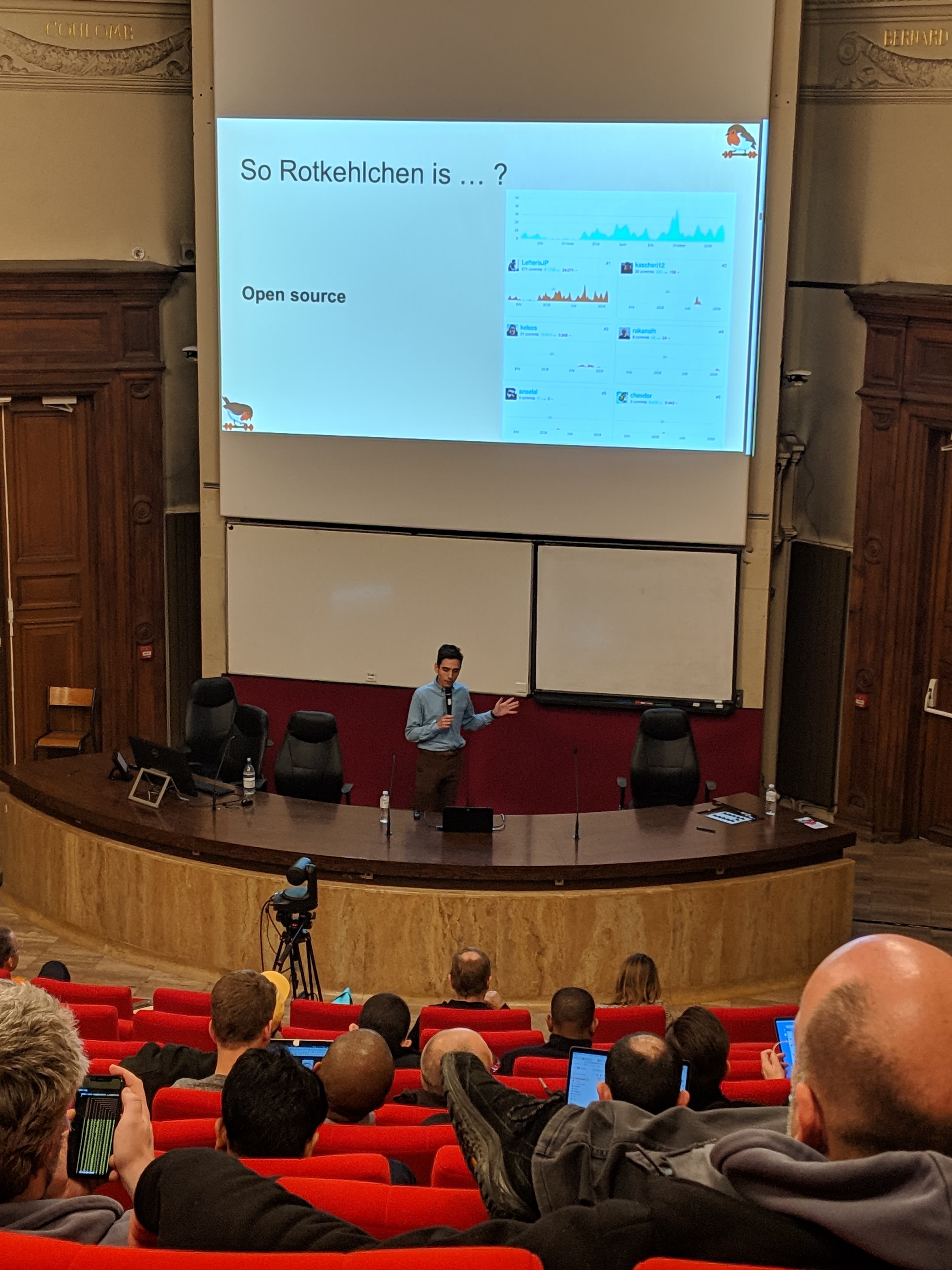 The reactions from the audience and the questions we got were really encouraging. People wanted to learn more about Rotki’s mission, how can they try it but most of all when would it be available in Windows and when would v1.0 be released? To see the full recording of the talk check here.

Meanwhile development steadily continued with sneak peeks of the premium graphs and among other things a lot of UI improvements.

Development continued in April but rather slowly. This month was dominated by events in Lefteris’ personal life as he became a father! 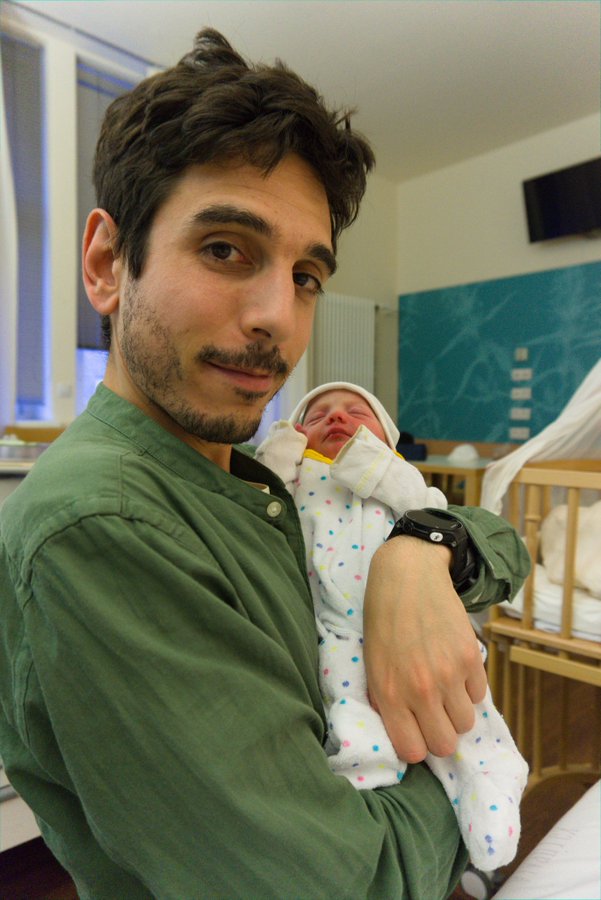 Slowly development picked up its pace again with various bug fixes done to the app but also some features being implemented. Most notable change that got implemented in May was a complete change in the way assets are handled by Rotki. The application no longer trusted any single token/asset symbol it is given. Instead from here and on it maintains a list of known asset symbols along with their conversions from/to external services. Any asset not in that list is not supported by Rotki. This lets us stop the guessing games about what assets the user has and instead allows us to know all details about each token in question and how it translates in each exchange or price querying website.

If you are interested to learn more about this topic it has been covered extensively in this post.

Development continued with a steady pace towards v1.0.

A lot of work is also happening outside of Github as a website is being built for Rotki which also contains a system that allows premium users to purchase and manage premium subscriptions. Also an API server is being developed for the premiums users of Rotki. 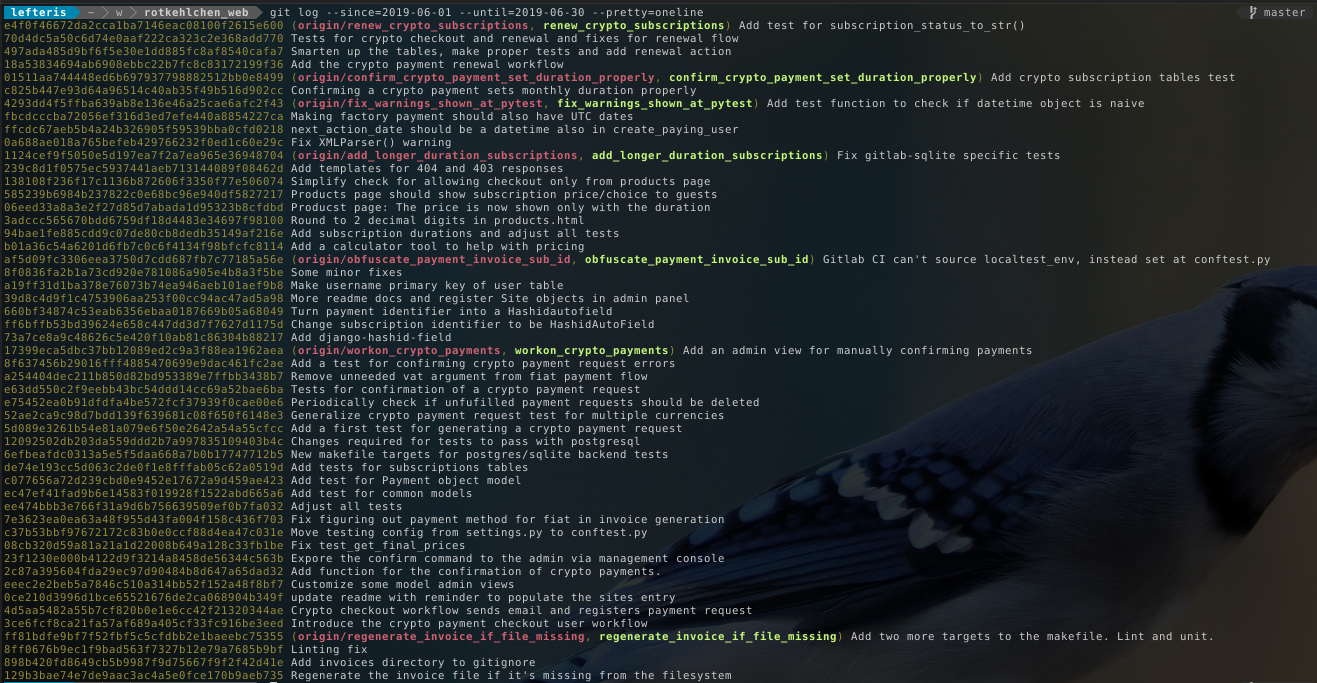 In parallel to all that Kelsos started the slow and painful process of rewriting the UI code using the vue.js framework

July is definitely dominated by finally reaching the v1.0 milestone. 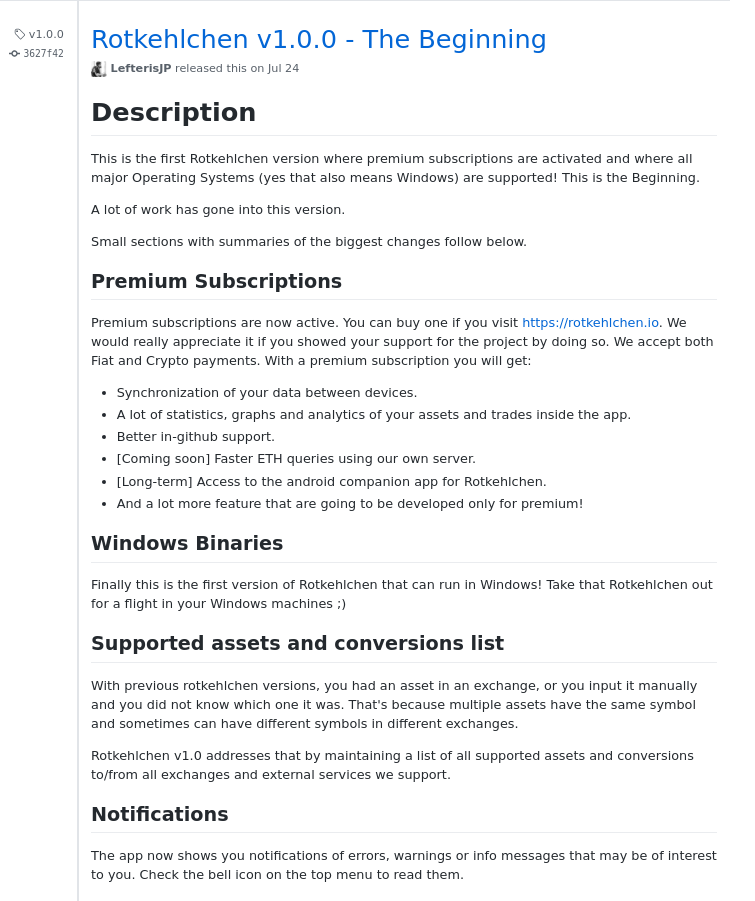 The Rotki v1.0 release was the biggest release of Rotki up to now (probably will be overshadowed by v1.1.0 though ;)).

It officially launched the purchasing of Rotki premium subscriptions and the website to support it. It also was the first release to utilize the premium API server to provide the users with the ability to save their data in our servers and get extra statistics and graphs for their assets and activity.

Rotki v1.0 also was the first release to be able to run in Windows.

With Rotki v1.0 the users could now for the first time conveniently see notifications in the top right of the front-end about information or warnings that the software wants to show them instead of always having to read the logfiles.

Finally this version had a ton of bug fixes, and new features for a full list of which you should check the release notes.

As if v1.0 in July was not enough, August was a really busy month for Rotki!

As the users started using v1.0, August started with bugfixing of various issues that were reported. Not one, but two bugfixing releases were made within a few days! 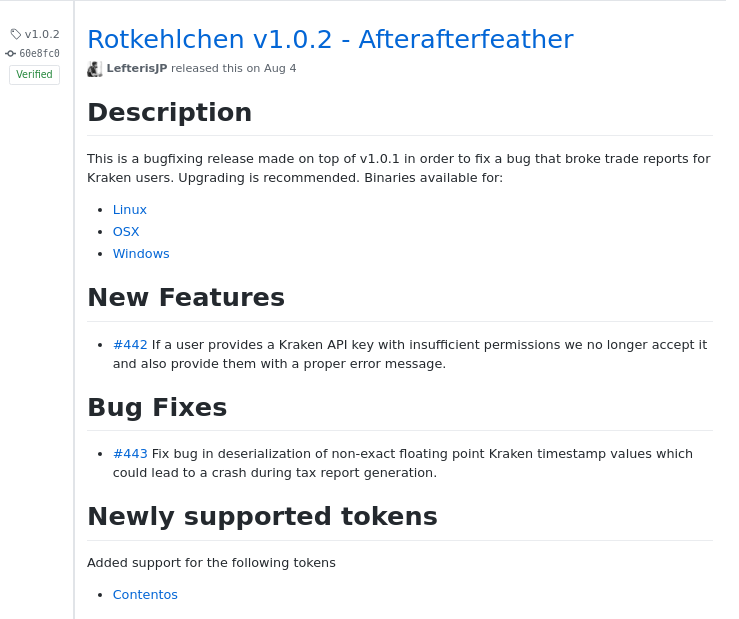 In August we also got our first paying premium subscribers, something that boosted our confidence that what we are building is something that people need and that the problem we are solving is worth all the effort we are putting into the project.

This blog was also started in August with the very first post explaining what Rotki is, what are our values and the vision for the future of the project.

An unforgettable event was our participation in EthBerlinzwei and Dappcon which we even sponsored! 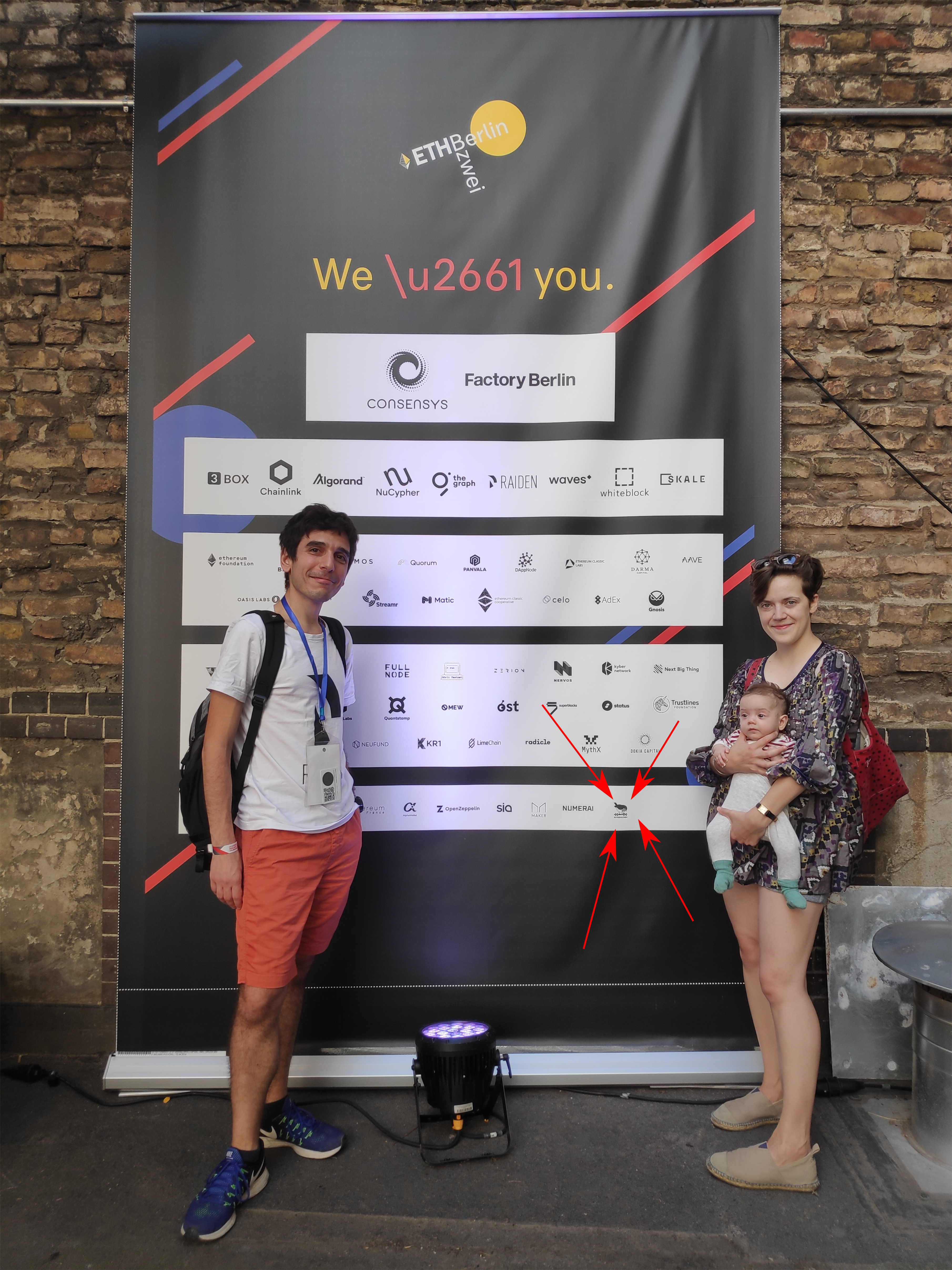 There we talked with many users who were interested in what’s in store for Rotki and we got lots of feedback and advice on how to go forward.

Finally at the very end of the month, a big release containing bug fixes and the most requested features was made. Release v1.0.3 added support for Coinbase which was a feature prioritized via request of a premium subscriber. 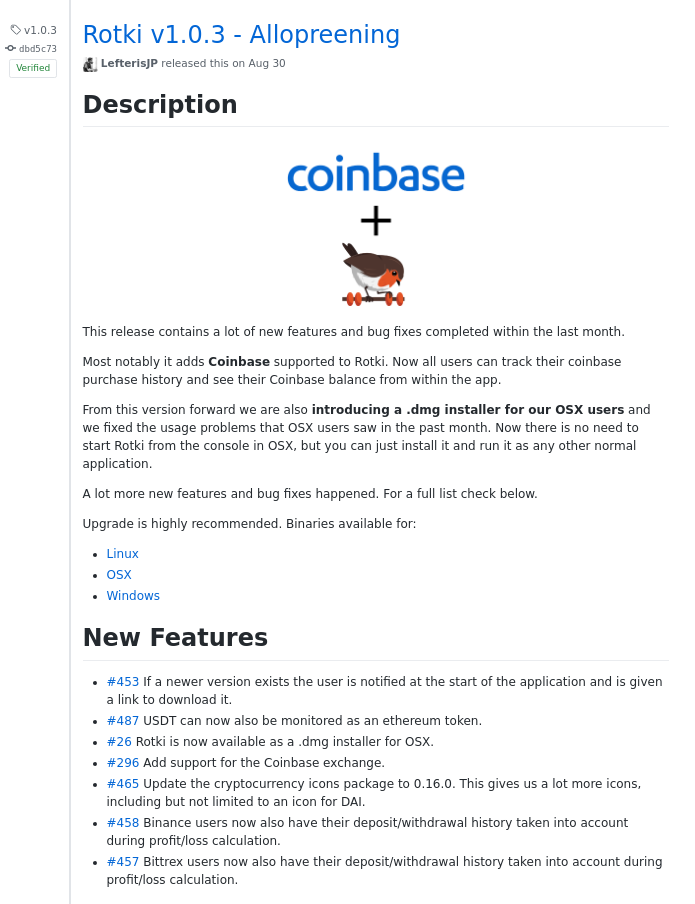 It also introduced a dmg installer for OSX users, added a popup warning users when new releases are available and added various smaller features and lots of bug fixes. Check the changelog for more details.

Development continued also in September. The biggest change implemented this month was saving all actions inside the database so that users won’t have to re-query each time they run Rotki.

In the meantime traction in social media is slowly increasing. To further improve our online presence we are trying to educate current and potential future users on why Rotki is needed by explaining the problems of centralization, lack of privacy and lack of data ownership that all other portfolio tracking and accounting solutions are facing.

In the meantime yet another post is made in this blog, this time to explain why Rotki maintains its own list of assets and their mappings.

Finally in order to support the Ethereum ecosystem from which we came we also became sponsors of ethereum’s devcon 5 that would take place next month in Osaka, Japan. 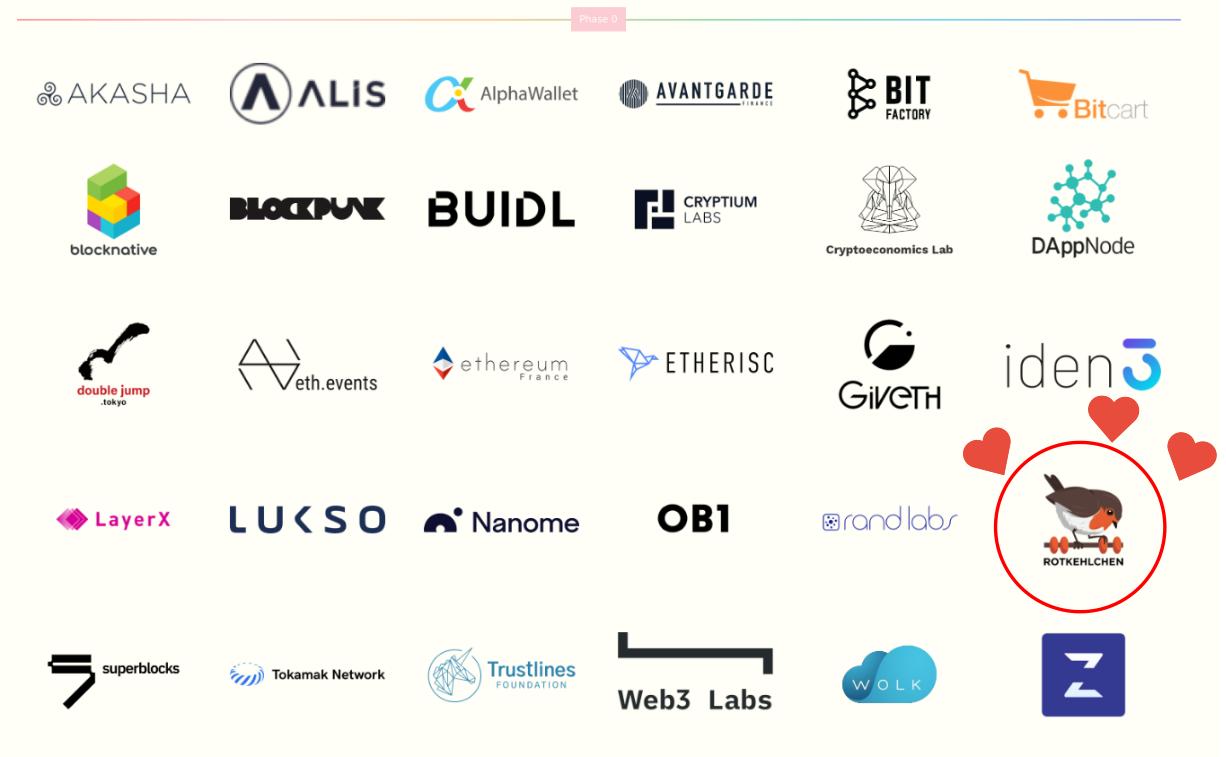 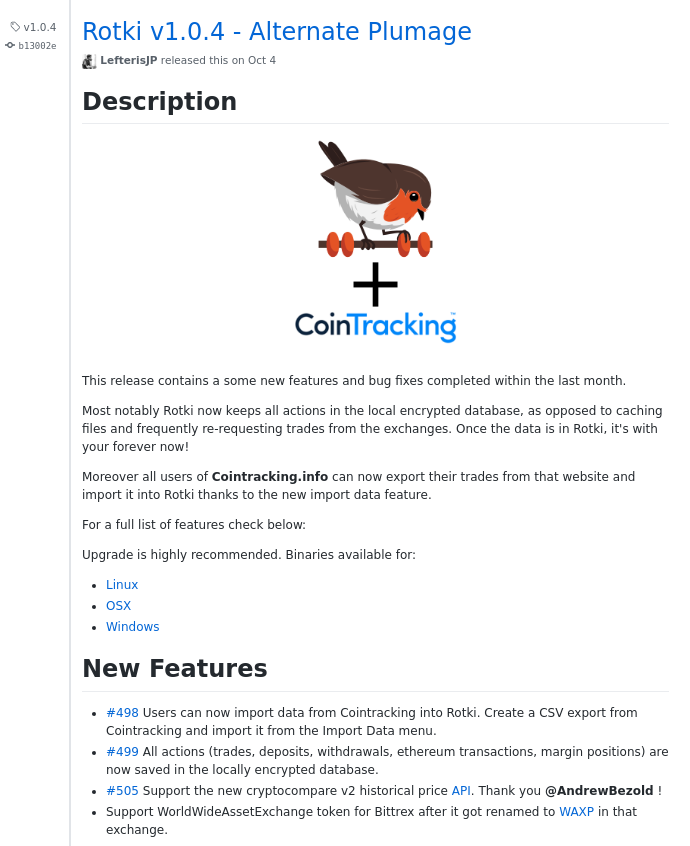 Release v1.0.4 contained multiple features and bug fixes. The most noteworthy feature of that release was the ability to import data from cointracking.info. That feature was requested by a premium subscriber and as such was prioritized. For a full list of changes take a look at the changelog.

The most seminal event of October was of course our participation in Ethereum’s Devcon 5 in Osaka, Japan and the talk we gave there regarding the problems of using centralized tools in order to do accounting for the world of decentralized finance. You can find a recorded video of the talk here. 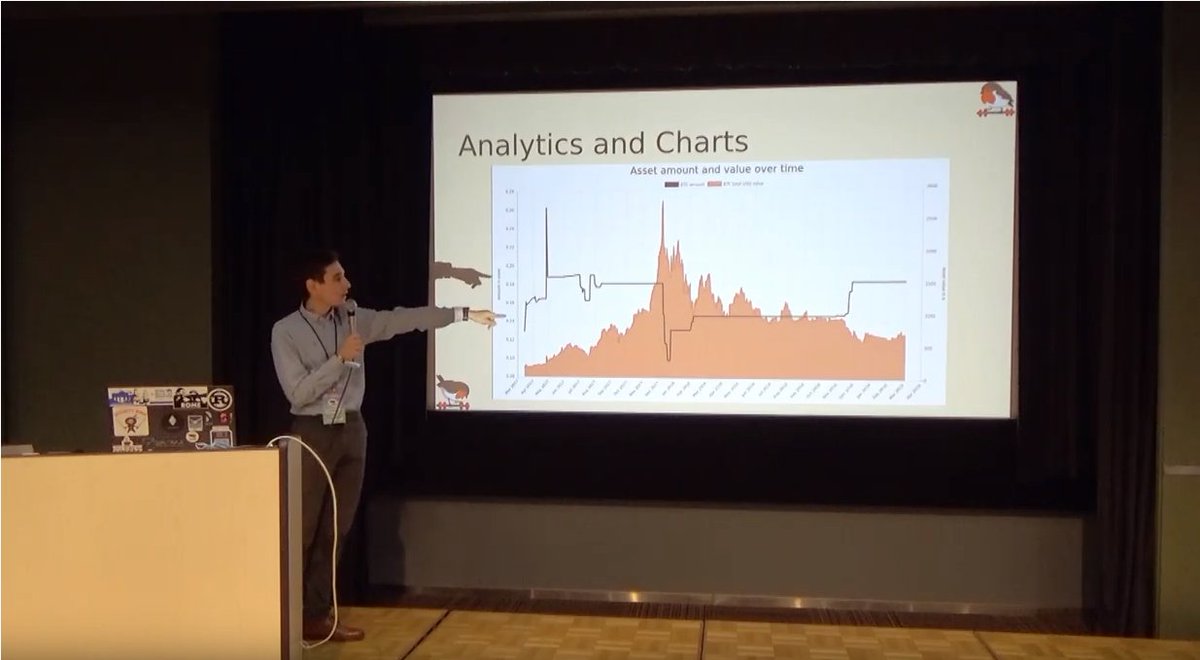 There was a lot of feedback given to us after the talk and during our presence in the conference. The feedback and questions revolved around upcoming DeFi features but also ideas of monetization for the project. There were ample discussions about the direction Rotki is taking as an opensource application trying to monetize itself and we got many ideas on potential ways forward.

Development also continued albeit in a slower pace due to travelling to the other side of the world for the conference.

In November development continued trying to fix various bugs and prepare the next upcoming release.

The most noteworthy change that occured in November was the rebranding of the project from Rotkehlchen to Rotki. Since even before v1.0 many people were complaining about the difficulty they faced when trying to pronounce or spell the original name. It made it really hard to spread the word about it, recommend it to friends or even google it. As such rebranding to the diminutive form was absolutely necessary. Github, twitter, website all got renamed. For a full list of what changed check this post. 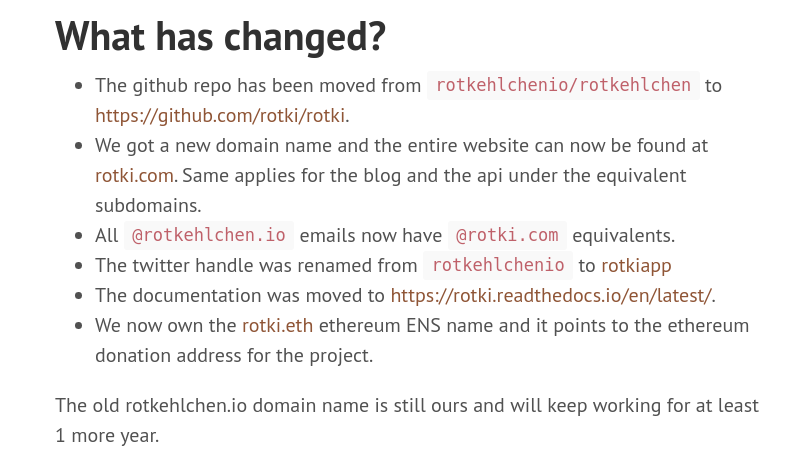 In November we also had to face the problems introduced by the introduction of Maker DAO Multi-collateral DAI and the renaming of the old DAI to SAI. We developed the required code and DB upgrades to handle it and also explained our view on why renaming an asset like that is misguided in this blogpost.

This month, Rotki has been on fire!

December started with the publishing of the last release for the year. Rotki v1.0.5 was released mainly containing the work done for the Maker DAO multi-collateral DAI upgrade. Some minor features and bug fixes were also included in this release. For a full list of changes check the changelog. 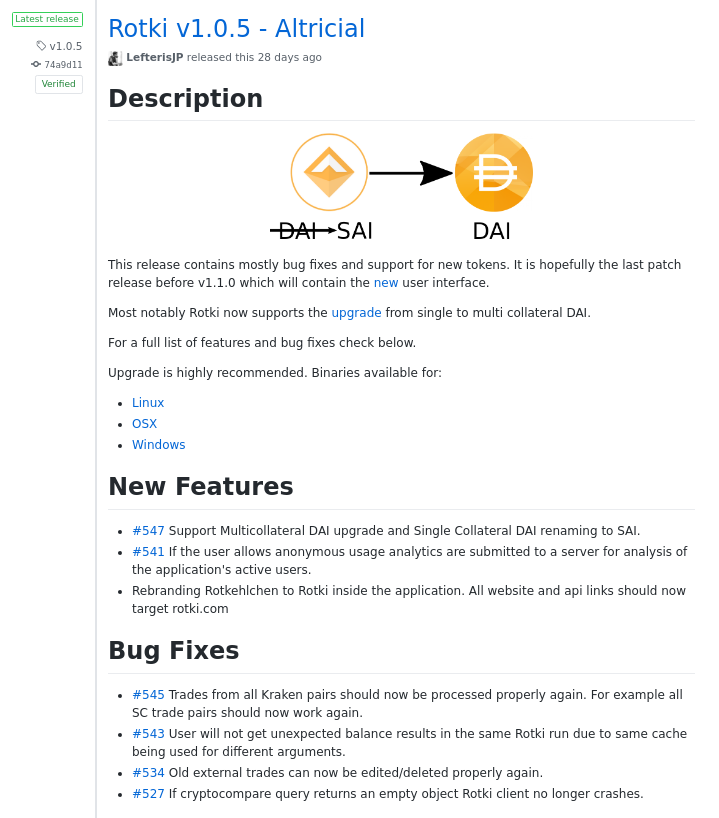 After requests from our users we also created two chatrooms where users can chat about Rotki. A Telegram chat and a discord room.

But December, presumably due to the holidays, has been one of our most productive months of work.

We started having two different branches in the project due to the sheer amount of changes happening. The master branch stays as the stable branch where releases are published from. The development branch is where all new work is going to.

The work that Kelsos had started in June in order to switch the entire front-end code to utilize the Vue.js framework was finally finished and got merged. 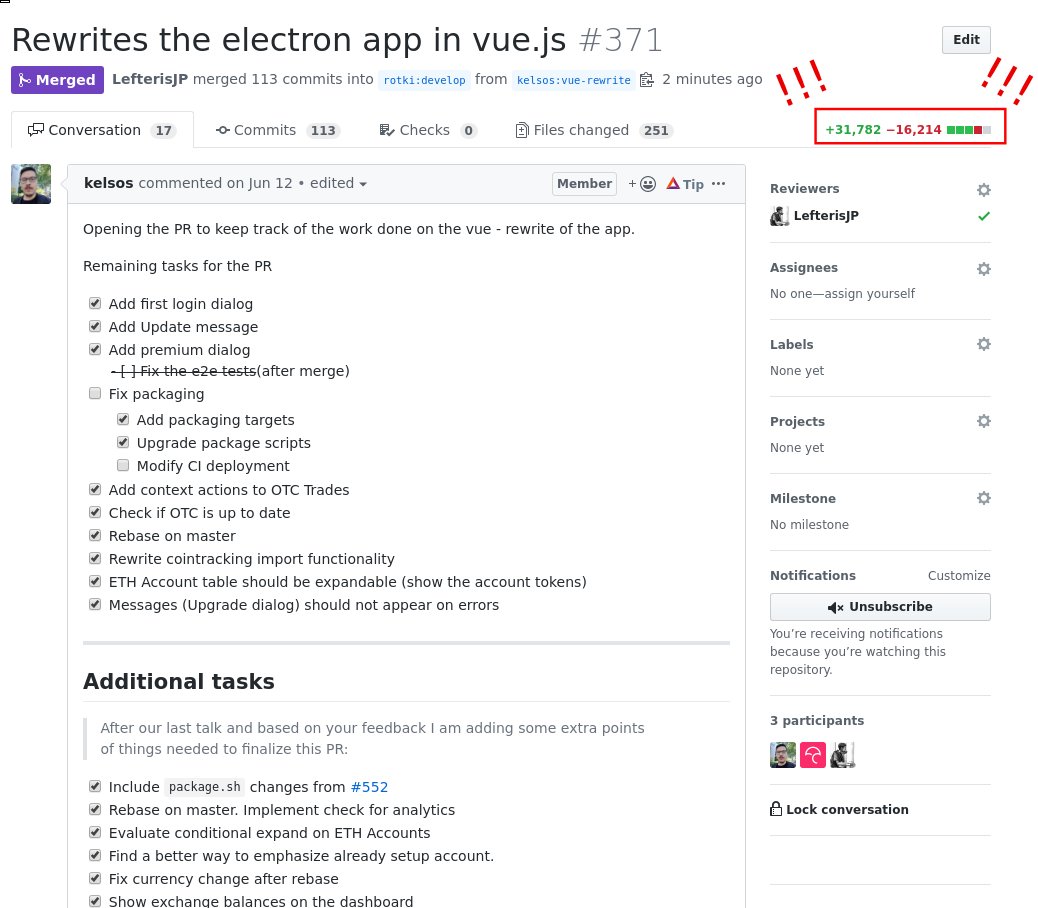 At the same time a lot of work preparing the project for v.1.1.0 was done. Most noteable of which was the complete removal of ZMQ and replacing it with a full-fledged REST API. Even as of the writing of this post work continues so that v1.1.0 can be ready in January 2020. I can’t describe how much work has been going on in Rotki the past few days. Best way to see it for yourself is to check the PRs in Github.

We also described how would v1.1.0 look in our new year resolutions for 2020 post. Check it out if you would like to see some hints about how v1.1.0 will look like and also some more long-term ideas about Rotki.

What a year has 2019 been for Rotki! We are beaming with pride! So much work has been done, the userbase is steadily growing, we acquired the first paid users and we have gotten more feature requests than we can currently cope with.

We would like to thank all the users who have entrusted us with their business and for all the good wishes and words of support we have gotten over social media. We promise that as we head into 2020 we will not let you down!

Heading into the new decade, we can only be positive about the future of Rotki!

A lot more work will be going into the project in order to fullfill all the feature requests we have been getting. Expect a lot more coming from us and for our online presence to increase and become stronger. The userbase will also steadily keep increasing, which will allow us to perfect the software and make it the best tool for everyone by taking all of your feedback into account.

Stay tuned for more updates and please help us in building the best transparent financial tool that enables you to take ownership of your financial data. Ways to do that are: